find an article or video 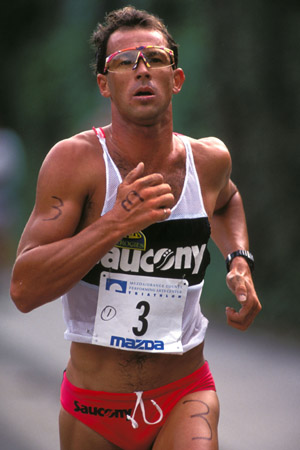 He was one of triathlon’s best loved personalities and sadly retired from competition. Because he was diagnosed a Ventricular Tachycardia, Welch alternated between relief that he caught the problem before it killed him, and sorrow that he had to leave that sport that he said, “this has been my whole life.” Welch first felt the symptoms two miles into the ’99 Hawaiian Ironman swim. He thought he was having an asthma attack, and stopped dead in the water for about five minutes. After leaving the swim he thought about quitting, but the instinctive drive of a champion athlete–and the embarrassment of dropping out–kept him going. He had roughly a dozen separate attacks during the ride as well. Welch describe feeling, “…lightheaded, it’s hard to see, I was short of breath, it’s a horrible feeling,” Welch finished the bike ride and, ignoring extreme discomfort, started the marathon. He had three more attacks during the run, but still finished in eleventh position. In Welch’s particular case, this is not simply an exercise-induced problem, but stress-induced. Lack of sleep, worry, the ingestion of stimulants, even coffee, can trigger an attack which, in Welch’s case, causes his heart to beat at 300 beats-per-minute for a period of several minutes. “Someone with a less well trained heart would have passed out and probably died,” said his physician, Dr. Emily Scott of Mercy Hospital in San Diego. “His heart beats so fast that its unable to pump the blood sufficiently.” Greg told us that: “I started in this sport in 1984 because my friend, Richie Walker, asked me to come watch compete in a triathlon. After that I was hooked. Richie Walker passed away in 1986 at 21 years and three days old. Six months before he died he suffered a cardiac arrest and was hospitalized for some time. He then had a pacemaker inserted and continued the sport slowly. Four days before he died, it was his 21st birthday and I really  wanted to do something special for him.” Greg is known best for winning the 1994 Hawaii Ironman Triathlon. He also won the ITU World Long-Distance Triathlon Championships in both 1993 and 1996, as well as the 1990 ITU World Championship.
More recently, he proved himself to be one of the world’s best racers over the Olympic-distance as well. He was considered one of the true contenders for gold in Sydney, and achieved an ITU world ranking of No. 7 by the end of 1999. His season last year included two World Cup wins, in Ishigaki, Japan, and Kona, Hawaii, USA. He also won the Mrs. T’s Chicago Triathlon and was runner-up in the Abu Dhabi, USTS-Oceanside and Escape From Alcatraz triathlons.  Greg started out in cross country running as a 14 year old knowing he could get out of school days doing something he really loved. Who would ever have guessed that this plucky little Aussie battler would become the sports most versatile athlete? He debuted in the sport of triathlon in 1985 at a local Olympic distance event finishing in the rear of the field. “He swam as though he had a bag of bricks tied to his ankles” according to his swim coach Roch Frey. Welchy did something about this in 1990. Greg moved into the fast lane at swim training even though he couldn’t keep up, but according to him it was the only way he would improve. Well low and behold, the diminutive Aussie phenomenon won the 1990 World Olympic distance Championship in his first try as a pro! Preparing for Kona in 93′ after finishing second in 92′ Greg was going for the win. After training with Jurgen Zack, the powerful German, all summer on the bike he was ready to take it on. Putting the final touches on his Kona preparation Greg won the World Duathlon Championships 2 weeks out from race day. Two days after the win in Dallas, Greg was riding home from swim training where a motorist therefore denying the gutsy Aussie of his first Kona title cleaned him up head on. After rehabbing the broken left knee Greg was like a bull at the gate with the fire in his eyes again. His goal was realized when he conquered Kona and took out 6-time champ Dave Scott in the process. Greg added another world crown, long distance triathlon, in 96′ becoming the only athlete in triathlon history to officially gain the sports Grand Slam. Greg is now coaching athletes in Olympic and Ironman distance triathlons as well as 5k through Marathon running. Greg holds a level 2 Triathlon coaching certification (Australia). He coaches athletes of all abilities with Chris Lieto (Ironman Wisconsin winner) among his stable. Thank you Greg for this triathlon “dream come true”that you gave to all of us!